The 1986 MY Laverda 1000 RGS Jota sports an air-cooled, four-stroke, 981cc, parallel three cylinder powerhouse paired to a five-speed manual transmission and can produce 83 horsepower and 78 Nm of torque.

It is a more tamed version of its RGS sibling, its engine now having an 120-degree crankshaft and rubber mountings, which significantly decrease engine vibration felt by the rider. 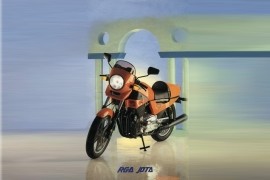