Looking for a blend of old-school looks and modern features? The 2003 Shadow Sabre may be just the right bike for you! Powered by a brawny 1099cc v-twin mill which is great both in the urban clutter with its low-end torque deployment, and on the open highway thanks to the smart 5-speed gearing, the VT1100C2 Shadow Sabre also retains that je ne sais quoi of retro bikes.

With a tank reminding of the classic Sportster and forward controls, dual chromed exhausts and massive headlight, the VT1100C2 Shadow Sabre is the modern herald of an era that's gone but never forgotten. 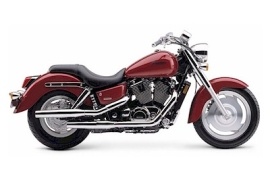 5 Low-Mile 1974 Honda CL450 Is One Great-Looking Vintage Scrambler, Might Have You Drooling