How about a bike powered by an engine derived from both the MX CRF and the MotoGP RC211V machinery? Sounds interesting, to say the least, doesn't it? Well, the 2009 Honda VFR1200FA comes with such a power plant, borrowing the V4 architecture of the MotoGP prototypes, and the Unicam valvetrain, allowing shorter, smaller and therefore, lighter cylinder heads.

Dripping with sport bike attitude, power and overall looks, the 2009 VFR1200FA takes the top-class race track performance to the street level. Great for commuting, city riding and simply wonderful for longer hauls, this machine is almost ready for touring with the included saddlebag mounts and thanks to a more upright position, riding it for a whole day will not be traumatizing for neither rider or pillion. 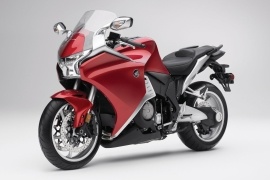