As expected, the 2009 VFR 800 Interceptor wasn't changed very much from his older brethren. Yet the new VFR 800 Interceptor will feature C-ABS just like the Fireblade. The design of this machine, again, not changed very much, but it was sharpened a bit up. The same V-TEC V-4 781cc 16 valve engine is placed under the fuel tank. There were rumors about Honda updating the VFR 800 to a V5 VFR1000 but apparently the VFR is here to stay. 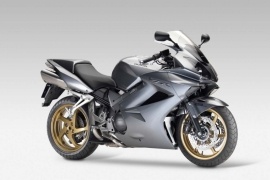