Honda has prepared an ABS-loaded version of their acclaimed sporty all-rounder Interceptor VFR800FI machine. Combining anti-lock brakes with the existing Linked Braking System resulted in an enhanced feel of the bike, adding to the riders' peace of mind and taking road safety to a higher level. 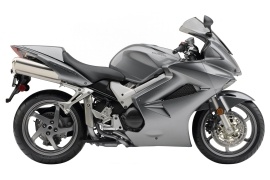