The House of Milwaukee has designed the 2016 MY Harley Davidson Low Rider for the most nostalgic among Harley fans, but without excluding the younger population, it retaining an overall modern look. Lace-spoked, chromed wheels, a black console with a speedometer and a tachometer, a chromed two-into-one exhaust system, as well as a two-tone paint remind of the classic American power cruisers.

At its heart lies an air-cooled, four-stroke, 1690cc, Twin Cam 103 powerplant paired to a six-speed manual transmission, that reaches its peak torque of 126 Nm at 3500 rpm. 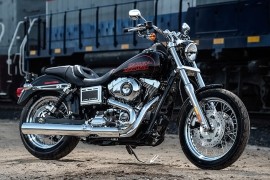 2 Harley-Davidson Fat Boy Eats Up $9,500 in Custom Parts as It Turns Into This Classic Grey