In 2015, at the EICMA Motorcycle Show in Milan, Ducati presented nine motorcycles, among which were the 2016 XDiavel and XDiavel S cruisers, which have been developed from the ground up.

The most noticeable change on the Ducati XDiavel was the new 1262cc engine equipped with Desmodromic Variable Timing (DVT) system, which at first had its debut on the 2015 Multistrada.

The “S” suffixed version of the Ducati XDiavel has improved performance and comes with a more aggressive overall design.

In the visual department, the Italian designers fitted the bike with new finishes for the belt covers of the engine, frame plates, footpeg plates, bi-material coating for the seat, Marchesini wheels, and machined rear-view mirrors.

The 2016 Ducati XDiavel S takes its power from the new 1262cc Testastretta L-Twin liquid-cooled engine and sends the power to the rear wheel through a six-speed manual transmission, boasting 156 hp at 9.500 rpm and 129 Nm (95 lb-ft) of torque that is available at a low 5,000 rpm. Minor mechanical changes were made to the engine, including relocated coolant pipes that are no longer visible on the exterior part of the engine.

The XDiavel and XDiavel S use a 50 mm adjustable upside-down fork on the front, but the only difference is that the S has a DLC coating, but on the back, both have an adjustable monoshock. 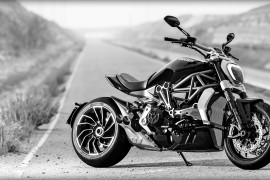 5 Next Gen Ducati Scrambler Looks Like a Neighborhood Bully