The 1968 Ducati 250 Monza was inspired by the 250 F3 Racer rode by Franco Villa in official races. It had, at its heart, an air-cooled, four-stroke, 249cc, single cylinder desmodromic engine mated to a five-speed manual transmission, and could produce a claimed 21 horsepower at 7200 rpm.

Also, it had standard features such as a drum braking system both in the front and in the rear, pull-back handlebars, a dual seat, laced wheels, a chromed exhaust system, a suspension package composed of a hydraulic telescopic fork in the front and dual shocks in the rear, a center stand and a small, round headlight. 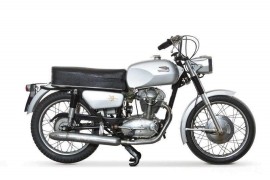