The 1969 Ducati 250 Mark 3D Desmo is one of the first machines from Borgo Panigale to be equipped with a desmodromic engine, and was one of the most sought after machines in its time. It comes with features such as laced wheels, a dual seat, a round headlight, an analogue instrument cluster, a chromed exhaust system, a center stand, drum brakes in the front as well as in the rear and a suspension package composed of a hydraulic telescopic front fork and dual shocks in the rear.

In the engine department it sports an air-cooled, four-stroke, 249cc, single cylinder powerplant paired to a five-speed manual transmission that can reach a maximum power output of 28 horsepower at 8500 rpm. 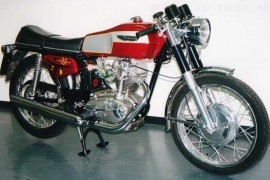