BRP has just announced part of its 2017 Can-Am Spyder lineup, with more to follow in August.

The most exciting news is a new Sport Mode for the Can-Am Spyder F3-S, which allows the rider to perform controlled rear-wheel drifts while maintaining vehicle stability. When Sport Mode is activated, the Traction Control System (TCS) is turned off but the Stability Control System (SCS) remains engaged. Previously Spyders allowed slow-speed, straight-line rolling burnouts even with TCS in its always-on mode, but now riders will be able to unleash more of the sporting potential of the liquid-cooled, 1,330cc Rotax ACE (Advanced Combustion Efficiency) in-line triple, which makes a claimed 115 horsepower and 96 lb-ft of torque. 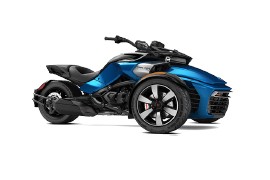 1 BRP Brings Can-Am to Life and Puts a Cherry on Top, Electrifying the Future With New Line

5 Can-Am Defender 6x6 Max Is a Unique Behemoth of a Build, Made for Cowboy Cerrone