While the German motorcycle industry was at the ground in the 1960s, BMW set a benchmark with the release of the R 69 S, which was the fastest German motorcycle at the time. Even in the international market, a small number of motorcycles could achieve the maximum top speed of 175 kph, which the BMW R 69 S succeeded to achieve.

The switchable steering damper was a new feature of the model that, in conjunction with the tried and tested full-swing chassis, gave the bike high directional stability even at higher speeds.

To set the motorcycle apart from the touring models, the white paint job and double seat, which were available only for government agencies, were released to the public as well.

The bike came with standard features such as full fenders, a dual exhaust system with pea-shooter mufflers, a large headlight, wire-spoked wheels, and an analog speedometer. 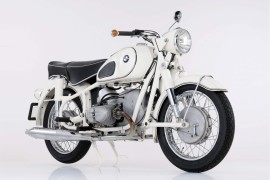 2 What Is the BMW M1 Procar Jagermeister Minus Two Wheels? A BMW R nineT Boxermeister