The 2006 MY Big Dog Mastiff has, at its heart, an air-cooled, four-stroke, 1916cc, V-Twin powerplant mated to a six-speed manual transmission with a belt final drive.

This machine is one of the most bulky machines from the American brand, with a shorter fork but with wide handlebars and a 250mm rear tire. It also boasts other features such as a single seat, a chromed, two-into-two exhaust system, chromed, cast-aluminium wheels, front and rear disc brakes, a large headlight, a hard-tail rear suspension with dual shocks and an analogue instrument cluster. 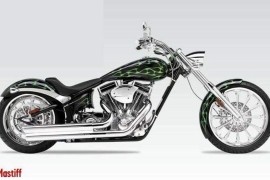 2 Big Dog Coyote Is a Howling Chunk of Custom Metal