The small Danish company Zenvo made a second generation for its supercar.

While the first was named ST1, the second received the TS1 name. Still weird, as the look of the vehicle.

There were only 15 units produced from the first generation of the ST1, and one burned during a test-drive for a British TV program. But the small car-manufacturer didn't close its shop. It returned to the drawing board and released a better car for 2017. But it didn't work too much on the alien-ship look of the exterior but focused more on the interior and the engineering side.

There were not too many changes for the TS1 over the ST1. At the front, a pair of splitters appeared on the side of the spoiler and a big wing was installed at the back of the car. But the overall shape was still the same.

Inside, there was a mix of Alcantara, carbon-fiber, aluminum, and leather for the sport-bucket seats. The instrument cluster was no longer fitted with analog dials but with a TFT display. The infotainment unit mounted on the center stalk was bigger and offered more options, including Bluetooth connectivity.

The engineering side was completely different. While the ST1 was powered by a 7.0-liter V8 supercharged and turbocharged, the TS1 featured an in-house developed 5.8-liter V8 with two superchargers. The total output was 1104 hp and it was mated either to a 7-speed dog-gear or a 7-speed automatic. Unlike its predecessor, it featured a Torsen limited-slip differential. 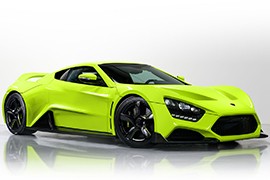