Denmark was never known as a country where fast cars were made.

But Zenvo tried to prove it otherwise. The small car-company build a hypercar with over 1000 hp.

The horsepower race started when the man put two horses on a carriage and that went on for centuries. In 2009, the small Danish company unveiled the car at the Geneva Motor Show and it was a true show-stopper. Due to very high taxation, a customer had to pay almost three and a half times the price of the car, to be registered. The car was almost entirely hand-built. The car-manufacturer announced that it will produce only 15 units.

The design was based on the hexagonal elements, suggesting the most stable and strong structure, the honeycomb. That shape was noticed at the front, where a big grille was spread almost the entire bumper. On its sides, there were another two big air-intakes to cool the brakes.

Inside, the electrically adjustable seats featured a sport-bucket design, with high bolstering on the sides. The instrument cluster featured round dials and it was a carryover from other cars built in Europe. Later models featured an LCD display.

The engine was a 7.0-liter LS7 that featured a supercharger and a turbocharger. The result was 1089 hp. It was mated to a six-speed manual gearbox or an option for a 7-speed automatic with paddle shifters. 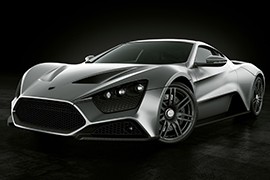