By 1992 Ford already took control over the Swedish carmaker Volvo and pushed forward to launch the new SUV range, the XC90.

When it appeared on the market, the XC90 made the BMW X5 and the Mercedes-Benz ML-Class look odd. Its rugged appearance and seven-seat interior were far superior to what its main competitors had to offer. Moreover, Volvo's reputation for safety transformed the Swedish SUV into a school-run favorite by moms and dads worldwide, especially in the U.S. Volvo built it on a platform developed by Swedish engineers.

Its look was a mix of big and rounded shapes. Its front fascia resembled the glorious PV544 model but with horizontal headlights instead of round ones. The tall greenhouse ensured impressive all-around visibility while at the back, the car featured broader shoulders over the wheel-arches, also known as "Volvo's shoulders." At the back, the tall taillights were part of the Volvo safety package. They were protected against minor bumps and visible from far behind the vehicle.

Inside, the XC90 featured a car-like interior mixed with an MPV dose. Its three-row seats allowed up to seven passengers inside, although the last row was mainly for children. Its middle seats were folding and could slide independently, one from another.

Volvo installed a range of gasoline and turbo-diesel engines ranged between 163 hp and 315 hp under the XC90's hood. Apart from the 4.4-liter V-8, which Yamaha supplied, the rest of the powerplants were developed by Volvo. 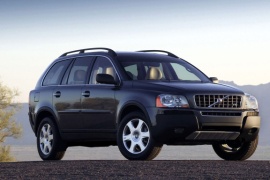