Volvo introduced the V60 in 2010 as a station-wagon for the S60 sedan lineup, and it received constant upgrades over its eight years lifetime.

The Swedish carmaker was known for its spacious station-wagon models. Vehicles such as the 440 or 740 were proof of LCV-like loading capacity. When the 2010 V60 was introduced, the carmaker showed that it turned its eyes to the lifestyle vehicle range. That station-wagon was designed for families, and even though it could carry more than a regular sedan, it was far behind its predecessors. The most significant advantage was that it didn't look like an LCV with windows on its sides.
For the 2014 model year, Volvo updated the V60 range and added several goodies, including a few engines.

At the front, the car featured new headlights with incorporated LED daytime running lights. A set of bi-xenon lamps was on the options list or fitted as standard depending on the car's version. Its sharper lines were enhanced, while the new hood amplified the muscular car's look. The carmaker introduced a new bumper with an a-shaped lower grille for the R-Design trim level and moved the DRLs into the side-scoops.

Inside, Volvo amplified the safety factor with its new, soft-touch panels and dashboard. There was a sense of luxury feeling thanks in part to the leather-wrapped interior and metallic trims on the center console, door panels, and dashboard. Its floating-design center console allowed a small storage space behind it, good to hide and forget small things.

Under the hood, Volvo introduced new turbocharged gasoline and diesel engines. It offered the car with a very wide choice of engines. It was available with a front-, or all-wheel-drive system. 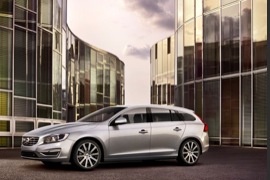