After a long absence from the large luxury sedan market, a brand new Volvo S90 showed up in Gothenburg, Sweden, in 2015.

Apart from the exquisite design and extensive use of LED strips, the new S90 is equipped with a host of new features & technologies, from cutting edge safety to cloud-based apps and services. For example, the car comes with Pilot Assist, a semi-autonomous system that gives gentle steering and keeps the car within the lane markings up to speeds of 130 km/h without the need to follow a car up front.

The S90 also comes with a new feature included in the City Safety pack, namely a function able to detect large animals and apply the brakes in an emergency to avoid collision. Mechanically, the luxury sedan is powered by a clean T8 Twin Engine plug-in hybrid powertrain along with the T6, D5 and D4 standard gasoline and diesel units.

The S90 competed with the BMW 5 Series and the Jaguar XF, however, the S90 was bigger, a fact that ensured a roomier cabin and mostly leg room for the rear passengers. The seats were extremely comfortable, all wrapped up with leather upholstery offered as standard. Standard equipment included more than enough features, such as an 8-speed automatic transmission, keyless start, auto hold, Pilot Assist, rear parking sensors, alloy wheels, a 9-inch touchscreen, navigation, cruise control, heated front seats, City Safety and many more. 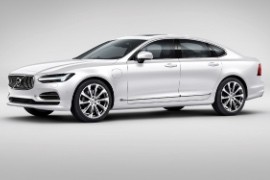