After it built the successful crossover versions for the V70s and the V90, Volvo tried to think outside the box and made a go-anywhere vehicle based on the S60 model.

Back in 1997, Volvo introduced the XC70 CrossCountry, and it was considered a pioneer for the segment. AMC introduced the Eagle crossover in 1980, and that was ahead of its times. The XC70 came at the right moment when the market was ready for it. The Swedish carmaker was happy with its sales and continued to introduce ever since, but the S60 CrossCountry was a different story. Volvo didn't know if the new car will receive too much attention from the customers, so it offered it in a limited edition.

From the outside, the S60 CrossCountry featured a higher ground clearance than its regular sedan brother by 65 mm (2.5"), which made it truly capable on unpaved roads. It sported an aluminum shield under the engine compartment at the front, but the aerodynamic grille looked like it was built for highways, not for off-roading.

Inside, Volvo offered the CrossCountry version with a better standard package than the rest of the S60 range. Its completely digital instrument cluster was not just a wide, uninterrupted LCD. It was divided into three areas, and the speedometer took center stage. The leather-upholstered cabin made the cabin looks luxurious. After all, it was a premium vehicle.

Under the hood, Volvo offered the S60 CrossCountry with a choice of three engines paired with either a manual or an automatic transmission. Depending on the option, the power went to the front or all four wheels via an all-wheel-drive system. 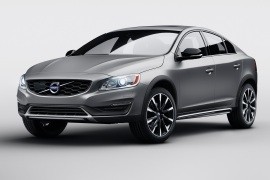