In the early '70s, Volvo acquired the DAF truck company's automobile part, which already had a small vehicle into production.

It rebadge-it as a Volvo and sold it as Volvo 66.

That was the first badge-engineered product made by Volvo Cars, and it stood in production until 1980. It was an interesting little car fitted with a continuously variable transmission (CVT) based on belts. The car's design was already finished when Volvo took-over the DAF automobile division, so it just reworked a little on the outside and sold it as a Volvo 66.

When Volvo took the production line, it cut the coupe version and kept only the 2-door sedan and the shooting brake (three-door station-wagon). Its products were slightly different than those sold under the DAF brand. It featured bigger bumpers with rubber inserts to absorb the energy in the event of an accident. Depending on the trim level, it featured single or dual headlights.

Inside, the 66 featured a simple dashboard layout in a typical Swedish minimalism style. The instrument cluster was covered by a black plastic rim and hosted a speedometer and four gauges on the left dial that showed the fuel level, coolant temperature, oil pressure, and an ammeter. The cabin was roomy enough for four mid-size passengers.

Under the hood, Daf installed a choice of two engines that sent the power to the rear wheels via a standard CVT gearbox. That's why it didn't need a tachometer. 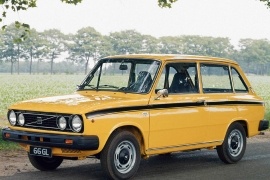