Volvo introduced the 400 series as a replacement for the 300 lineup in the mid-'80s, and in 1993 it unveiled a facelifted version.

The 440 was a compact-sized premium vehicle, which didn't compete with anyone since it was shorter than Audi 80, BMW 3 Series, or Mercedes-Benz C-Class, which were above the compact segment in the European market.

The 440 was a five-door hatchback and was a solution for those who needed more trunk space in a smaller package and a premium feel. It also was a time when Volvo started to change its design trend from straight cut lines to curvy forms. The 1993 440 featured restyled headlights when compared to those of the 1987 version. Its front fascia resembled the Volvo 850, which Volvo launched in 1990. Behind the rear doors, the carmaker included a triangular glass area in the wide C-pillar. The 440 wasn't just like a regular hatchback since the tailgate featured a flat horizontal area behind the bottom of the rear windscreen.

Inside, the 440 still used the same square design. Volvo's designers combined the instrument cluster and the center stack into a big, square element with the air vents and the tape player. The car featured a roomy interior, despite its short length. It was good for transporting up to five adults on short distances, but four of them could fit nicely inside. When folded, the 440's rear bench expanded the trunk from 330 liters (11.6 cu-ft) up to 1,028 liters (36.3 cu-ft). A significant improvement for the car was the reinforcing steel beams inside the doors, which increased the passengers' protection during a side accident (T-bone).

Volvo offered the 440 with a choice of diesel and gasoline engines ranging between 83 hp and 120 hp. 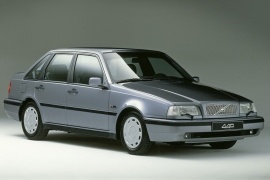