Volvo introduced the model 440 in 1987 as a replacement for the 300 series, which was already old, and built it on the same platform as the successful 480 model.

While the 480 was a three-door hatchback with a sporty flavor thanks to its pop-up headlights, the 440 aimed at those who were looking for a premium vehicle but shorter. The premium German carmakers didn't have anything to oppose it since the Audi 80, BMW 3 Series, and the Mercedes-Benz C-Class were longer. Moreover, none of them were hatchbacks.

Its front fascia resembled the 740/760 series but shrunk to fit. By those times' standards, it was considered a compact-sized vehicle. From its profile, the 440 featured angular shapes, and behind the rear doors, it added generous triangular, raked-forward windows. Thus, the carmaker diminished the blind spots. At the back, the squared taillights were wide, thus reducing the trunk's opening.

The cabin was quite roomy for a car of this size. Thanks to the change toward a front-wheel-drive platform, there was less intrusion in the cabin from the engine and gearbox. That allowed the carmaker to push the front seats forward, leading to more legroom for the rear-seat passengers. At the back, the split-folding bench proved to be useful for loading long items or bulkier luggage.

Under the hood, Volvo installed a wide range of engines, either supplied by Renault or built in-house. They were paired to a standard 5-speed manual gearbox. A four-speed automatic transmission was offered as an option, while Volvo developed and installed a CVT on later versions. 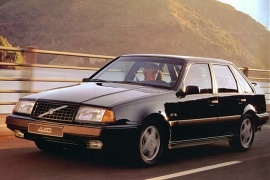