Volkswagen introduced the third generation of the Jetta at the beginning of the '90s and built it on top of the same platform as the acclaimed Golf, but aimed at different customers.

There was a high demand for sedans on the market, and the compact-sized ones were the most though after. Moreover, they didn't look like some cars for teenagers, which convinced more families to opt for the Jetta instead of the Golf. So, for the 1992 model year, Volkswagen tried a marketing trick by naming the Jetta as Vento for specific markets.

The 1992 Jetta looked differently than the Golf III. It sported new headlights with a straight inner side and rounded exterior, in complete opposition to its hatchback sibling. Its tall greenhouse showed a thicker C-pillar, enlarged at the bottom, while the trunk was very tall, creating a dynamic stance for the car. At the back, the squared-looking taillights were split between the quarter panels and the trunk lid.

Inside, the Jetta was available with fabric upholstery, while a leather-wrapped interior was available for specific trims and engine versions. The curved dashboard was centered around the driver's area, with high-mounted vents and storage space at the bottom of the center stack. There was room for three passengers in the back, yet not enough legroom for taller people.

Under the hood, the Jetta/Vento didn't get all the engine versions available for the Golf but still featured a choice of 11 engines. For specific markets, it was available with an automatic transmission. Most versions featured front-wheel drive systems and also all-wheel drive versions named Syncro. 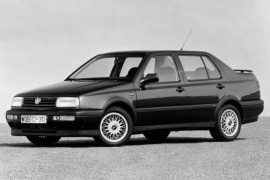