Volkswagen created the Tiguan Allspace to compensate for the lack of an affordable seven-seat SUV but managed to stay away from its bigger brother, the Touareg, customers.

Despite the world pandemic situation, Volkswagen had to refresh the Tiguan range, and it did it. Working with uninfected or healed workers, it managed to keep its production lines rolling, and the 2021 model year rolled out from the assembly lines in autumn 2020. That was just the beginning. Since the Allspace was just the extended version of the Tiguan, it was normal that it will receive an update as well.

At the front, like its five-seat sibling, the Tiguan Allspace featured a more striking grille with illuminated strips and a reshaped VW badge in the middle. Its LED headlights were enhanced and received 24 individual LEDs, which could adjust their light for different situations. The system was first implemented on the Touareg.

Inside, the carmaker offered its newest version of the control panel for the climate control system, with a touch-screen and sliders on the center stack. The seven seats remained similar to those installed on the previous, non-facelifted model. Strangely, the Allspace offered less trunk space than its five-seat sibling, offering up to 1,755 liters of space instead of the 1,920 liters provided by its smaller brother, with all the seats folded down. 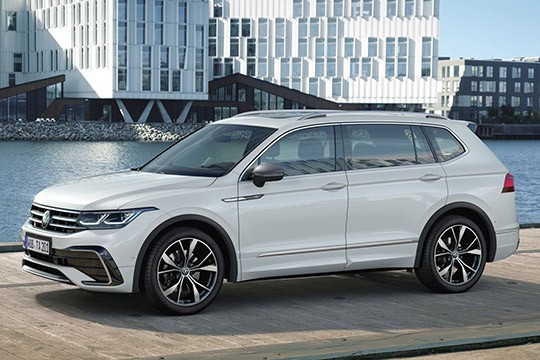