After the SUV coupe evolution, more and more carmakers tried to offer something on that segment, dominated in the beginning by premium brands.

But the customers with not-so-deep pockets could only dream of an affordable SUV Coupe. Yet, it came in the shape of the Renault Arkana for the European and South American market, while the US customers were left aside.

In 2021, Volkswagen reconsidered its strategy and introduced the Taigo as a crossover coupe based on the same MQB A0 platform as the T-Roc. Its higher ground clearance and sporty-aggressive stance were enhanced by the front fascia, which featured a light strip across the grille, stretched from side to side. The LED daytime running lights surrounded the headlights, with an angular shape on the outer corners. On the lower part of the bumper, the carmaker installed an A-shaped grille that helped to cool the engine.

From its side, the roof descended behind the C-pillars in a short fastback style. Its Kamm back design was adorned at the top of the tailgate with a roof spoiler. The back of the car didn’t reveal any big surprises. Volkswagen followed the same horizontal-line design theme that became a common feature for most of its models.

Inside, the carmaker offered the MIB3 infotainment system fitted as standard on the entire range. Depending on the options, a digital instrument cluster for the driver. Like the T-Roc, the Taigo provided limited legroom for adults seated on the rear seats.

Under the hood, Volkswagen dropped a small engine range with three and four cylinders paired to a five or six-speed manual or a seven-speed (dual-clutch) automatic. 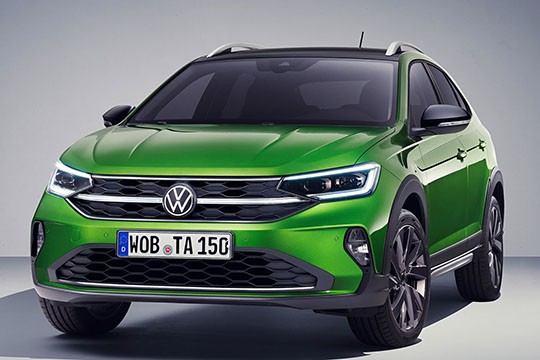