Volkswagen refreshed the entire T-Roc lineup in 2021, four years after the nameplate introduction on the market.

That facelift also included the sportiest version, the R.

The R version was the hottest of them and provided a sportier appearance backed up by a more powerful engine. Moreover, with the new upgrades, it looked more aggressive than its non-facelifted sibling.

Volkswagen understood that only placing a more powerful engine and standard all-wheel drive won't be enough to justify a much higher price than the rest of the T-Roc range. Thus, it added a shiny-black honeycomb-style grille at the front, crossed by an LED strip for the daytime running lights system that started from headlights. Also, in the redesigned bumper, a pair of vertical LED lamps adorned the side scoops that flanked the center lower grille. From the sides, it was noticeable the lowered ground clearance by 20 mm (0.8") and the silver caps for the rearview mirrors. At the back, a black roof spoiler completed the sporty image. Thanks to the optional Akrapovic titanium exhaust system, the fake tips in the back were replaced by real ones.

Inside, the carmaker installed sport seats with higher bolsters on the sides and exclusive upholstery. Also, it offered the option for a body-colored dashboard. In addition, the driver got the Digital Cockpit Pro 10.25" TFT display for the instrument panel, while the rest of the range had to cope with the 8" version. Another improvement was for the infotainment system, which sported the 9.2" display atop the center stack.

But the most crucial aspect of the T-Roc R was the drivetrain, which received the two-liter turbocharged gasoline engine. It provided 300 hp and was paired with a seven-speed automatic (dual-clutch) gearbox that sent the power in all corners. 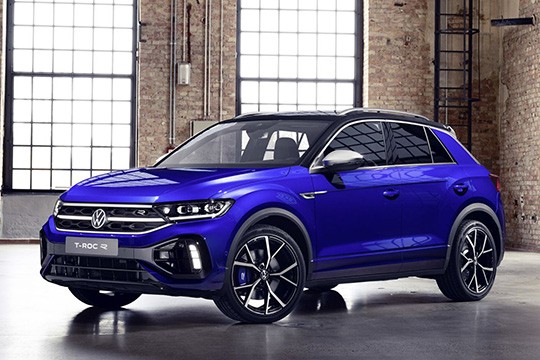