SUV-cabriolets are not a new thing on the market.

Nissan tried with the Murano and Range Rover with the Evoque. None of them were successful. But Volkswagen believes that it can succeed and launch the T-Roc Cabriolet in 2019. The sub-compact SUV from Volkswagen is positioned under Tiguan and above T-Cross.

The 4.26 m (13.9 ft) vehicle has two doors and a canvas roof. TT-Roc comes with the MQB platform, which means that it can be equipped with FWD or 4Motion all-wheel-drive system. At the launch, Volkswagen announced only the 2wd, but this may change over time since the T-Roc is equipped with all-wheel-drive.

Inside, Volkswagen installed the latest MIB infotainment system with Apple CarPlay and Android Auto. It offers room for four people and a safety roll-over mechanism that deploys automatically if a sensor will detect a roll-over threat.

For the engine compartment, Volkswagen installed two gasoline engines: a 1.0-liter and a 1.5-liter, both turbocharged, with 115 hp and, respectively, 150 hp. The later one can be equipped with a 7-speed double clutch gearbox. 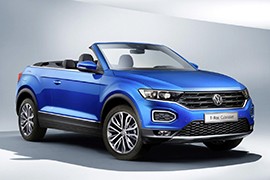 1 This 1969 Volkswagen Super Bugger Is a Tiny RV With a Cute Face, Doesn't Come Cheap

3 Rare 1946 Volkswagen Beetle Found in a Basement, Spent Decades in the Dark

4 Dream Big: The Iconic Phone Car Is a ‘75 VW Beetle Rebodied as an Old-School Desk Phone