The fifth generation of the Volkswagen Polo was launched in 2009 and, five years later, it received a facelift to refresh its image on the market.

The fifth generation of Polo was elected the “2010 Car of the Year” in Europe and that well-deserved award was an acknowledgment of over 14 million units sold worldwide by its all generations, since 1975. In 2014, the car was refreshed both in the interior and on the exterior.

The 5-door version of the Polo from 2014 received a new front fascia, with a headlight design that was inspired by the Scirocco. A new design for the front bumper showed a wider grille on the apron, plus a longer lip underneath, that had an interesting role in pedestrian protection more than for an aerodynamic use.

Inside, the whole range received a touch-screen infotainment system installed on the center stack. It was a new idea for the small-segment, where the car was placed. The access to the five passengers was easy thanks to the four side doors. There was a decent room inside, even for three passengers on the bench seat. The split-fold bench's seatback was standard.

The car was fitted with a wide choice of engine, both diesel and gasoline-powered units. For some versions, the standard transmission was 5-speed manual while for others was a 6-speed manual. A DSG gearbox was on the options list for both diesel or gasoline units. 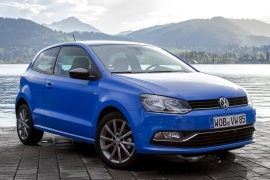