1 Volkswagen Updates the ID.4 in the U.S. With Auto Hold, Navigation Improvements, and More

By the fifth Polo, Volkswagen already understood that it had to make it full-scale with all the body versions available when it introduces a new generation. Maybe it didn't have all the engines or transmissions, but at least it had to show the 3- and the 5-door version for the little Polo.

It was a significant step from the design point of view with angular lines and a sporty-looking front fascia. The angled headlights and wide grille in the lower side of the bumper inspired a sporty sensation. The three-door version featured a slightly ascending window line and fixed windows in the back. Volkswagen considered that the pop-out, front-hinged windows were useless for the rear passengers but very annoying for those in the front seats.

Inside, the 3-door Polo offered bucket seats at the front with a center console between them that sported the gear-stick and the hand-brake. Its dashboard was typical for a Volkswagen, with rounded edges, soft materials, and a center stack for the infotainment system and the climate control unit. In the instrument cluster, the Polo designers installed a TFT display between the speedometer and tachometer and deleted the fuel-level and the coolant-temperature gauges. In the back, the split-folding (60:40) bench was fitted as standard.

Under the hood, Volkswagen installed an extensive range of diesel and gasoline engines ranged between 60 hp and 105 hp. The Polo GTI was a different story. 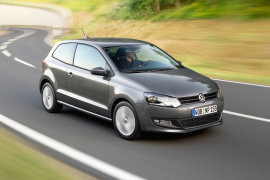