In 2001, Volkswagen introduced the fourth generation of its small-sized contender, the Polo.

And it wasn't that small anymore.

The 2001 Polo was bigger than its predecessor. It was longer even than the first generation of its bigger sibling, the Volkswagen Golf. The increase in size and features made the little Polo a better alternative for other established compact-segment vehicles. Volkswagen installed a wide choice of safety features, which were not even available for other cars from Polo's segment.

From the front, the Polo resembled the look of the new, smallest, Volkswagen Lupo with four round headlamps at the front. A black grille took an imposing position between them and gave the car a friendly look. The designers stated that they design a car to look happy, so the potential customers will smile when they see it.


Inside, the Polo featured a long list of equipment types, either standard or from the options list. The air-conditioning unit was fitted as standard on the higher trim levels. There were a few options for the seats, starting with plain bucket seats and ending with a pair of sport-bucket ones for the Polo GT. The sportiest version, named GTI, was available only on the three-door version.

The small Polo came with an extensive list of available engines with power ranging between 55 to 115 hp. 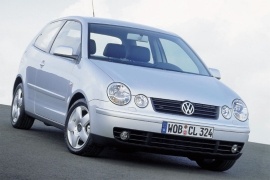 3 The Volkswagen Lamando 5XL Can Seat Up to 10 People, Is Not Photoshopped