1 The New VW Scirocco Could've Looked Like This, if Most People Weren't Into Crossovers

5 Is the Volkswagen e-Golf Making a Comeback Based on the Golf Mk7?

The Polo nameplate had been around ever since 1975 and was sold worldwide in a hatchback, sedan or estate version.

The third generation Polo or the Mark III was unveiled to the public in 1994 and was a completely new model built on an all-new platform shared with the Seat Ibiza. Thew new platform used the previous generation’s floorpan and many other mechanical parts.

While the then-new Polo had a similar dashboard, as well as the same powertrain options as the Ibiza, the two never shared any body panels.

For 1995, the Polo could be equipped with an all-new 1.0-liter gasoline engine that was added to the range. Other engines available were a 1.3-liter, a 1.4-liter, a 1.6-liter all gasoline and a 1.9-liter diesel unit. Power ranged between 44 hp developed by the 1.0-liter unit to 99 hp with the Classic and Variant models.

At first, the Polo was available as a three-door or a five-door hatchback, however, the sedan and the estate versions was later introduced.

The third generation Polo was later replaced at the end of 2001, however, the saloon and the estate models were kept in production until 2003. 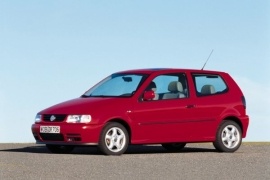