Volkswagen introduced a facelift for the second generation of the Polo in 1990, and besides the three-door hatchback and the sedan, it offered a sportier-looking version named Polo Coupe.

The Polo was already an old model. It was on the market since 1981, and the carmaker didn't show an actual intention to change it. Still, it had enough resources to make it a better car. Along the way, it lost the slim bumpers and gained fuel-injected and supercharged engines.

For the 1990 facelift, the carmaker dropped the round headlights for the Polo Coupe. A pair of squared headlamps replaced them, and the entire front fascia got rounded edges. The black slated grille remained in place with a chromed VW badge on it. A wrapped-around plastic bumper extended downwards into an apron enhanced the car's look. For a specific version, the carmaker added flared wheel-arches. In the back, the kammback design with a raked-forward rear windscreen and C-pillars made the little Polo looks sportier.

Inside, the carmaker kept the angular look of the dashboard, with a flat area in front of the passenger side and a small instrument cluster raised in front of the driver. A two-spoke steering wheel was standard, while a three-spoke was on the options list. The instrument panel featured two large dials for a clock and a speedometer with two gauges for the coolant temperature and the fuel level. As an option or standard for the upper trim levels, Volkswagen installed a tachometer. The cabin provided enough room for two occupants at the front and limited for two in the back. Still, for short trips, those were just fine.

Under the hood, the Polo Coupe offered a choice of gasoline engines ranged between 45 hp and 113 hp. The latter was known as the Polo G40 and featured a 1.3-liter supercharged engine. 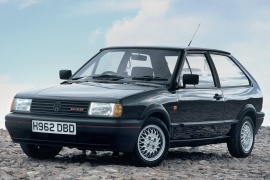