2 VW's Scout Electric Off-Roaders Might Get Built by Foxconn, With Magna Also in the Cards

3 The New VW Scirocco Could've Looked Like This, if Most People Weren't Into Crossovers

Just one month after the production of the Polo 1 ended, the Polo 2 was released to the public. It featured a new design, that combined the hatchback with a station wagon. But that wasn't all.

The second generation was available in more body shapes such as the “squareback”, which combined a coupe with a station-wagon, a coupe with raked C-pillars, and a sedan with two doors named Derby. It was offered in three trim levels and the top-spec CL and GL featured a drivetrain carried-over from the first generation.

In 1990, a major facelift, named 2F Polo, was launched on the market. The car was completely overhauled and featured new headlights and a new interior with a dashboard design inspired by the larger Passat. It was the first time when the Polo received power brakes.

The interior started with simple cloth in a single color and black dashboard. For the CL and GL trim levels, there was a different type of upholstery and a blue dashboard. The car featured a stereo and a side rear-view mirror.

In 1981, Polo was equipped with small, 1- and 1.1-liter engines. Later on, the car was fitted with bigger units. The sportiest version was the Polo GTG40 that featured a supercharged 1.3-liter engine that boosted out up to 115 hp. It was the fastest car of its size on the market, obtaining a world record of 129 mph (207.6 kph) over 24 h. The last series 2F Polo rolled out of the factory lanes at Pamplona in August 1994. 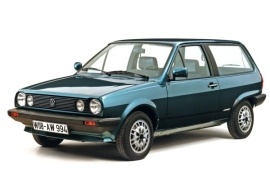