Four years after the Golf's first-generation launch, Volkswagen introduced a smaller sibling for it, the Polo.

The badge engineering was uncommon in the '70s, but Volkswagen did it with the first Polo generation, a re-badged Audi 50. Unlike its sibling, which never got good sales numbers, the Golf's smaller brother was a winner since day one. Its simple appearance and small sizes made it an ideal competitor for the Italian and French cars, which mainly were the kings of the small segment.

Volkswagen said that the Bertone Design Studio was involved in the design process, but its contribution was smaller. Unlike the Golf, which Giugiaro designed, the little Polo received just a few touches here and there from Bertone. Its two-box, hatchback bodywork resembled, somehow, its bigger brother look. The round headlights and the black plastic grille with horizontal slats were similar. It was launched only as a three-door vehicle. Later on, Volkswagen introduced new body shapes.

Inside, the design was bland, with a straightforward dashboard design, interrupted by a pair of vents in the middle. Underneath it, the carmaker added a shelf that covered the entire car's width. The instrument panel was as simple as possible, with only a speedometer and a fuel-level gauge. For other important information such as coolant-temperature or oil pressure, Volkswagen relied on warning lights. The interior featured a pair of seats at the front and a folding bench in the rear. It was good enough for four adults.

Under the hood, the German carmaker introduced the Polo with a 1.1-liter engine. Later on, it added a 0.9-liter and a 1.3-liter engine. All versions were paired to a four-speed manual gearbox. 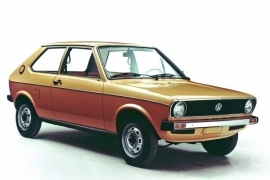