Just like the pre-facelift version, the refreshed 2019 Volkswagen Passat GTE is based on the standard Passat sedan and is the second of it's kind to be powered by a plug-in hybrid system, offering over 1,000 km of total driving range.

After no less than 30 million Passat models have been produced over the span of 7 generations, the eighth iteration of the nameplate in GTE guise was unveiled in 2019.

Thanks to new hardware and software, the new Digital Cockpit has been massively improved compared to the previous Active Info Display. With much enhanced graphics and improved features, the system now offers three various display configurations can be customized using the redesigned multifunction steering wheel. Still part of the Passat lineup, the GTE plug-in hybrid has received a considerably higher all-electric range, with up to 55 kilometers being covered in the WLTP cycle, which correspond to approximately 70 kilometers in the old NEDC.

Visually, the Passat GTE is still very similar with its standard version, with minor changes to the front end consisting of a specific chrome radiator grille with a blue line, C-shaped LED daytime running lights as well as chrome bladed lower side air intakes. The interior is decorated with blue stitching and ambient lighting while the display system has been modified for integration with the hybrid drive system.

Mechanically, the GTE still gets motivated by the same a turbocharged direct injection gasoline unit mated with an electric motor offering a total of 218 horsepower. It can reach 130 kph in pure electric mode and over 220 kph in hybrid mode, where both powerplants work in tandem. 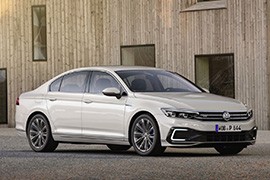 1 Dream Big: The Iconic Phone Car Is a ‘75 VW Beetle Rebodied as an Old-School Desk Phone

3 Volkswagen ID. Buzz Production Comes to a Screeching Halt Due to Battery Issue

5 Volkswagen Says Apple Is Unlikely to Build an Apple Car