3 Volkswagen Allegedly Changed Its Lead Designer Because of Styling Preferences

Even though it came after the facelifted version of the T6, the new generation was not named T7 on the official papers. In addition, unlike its predecessors that were built on designated utility-vehicle platforms, the 2021 Multivan was based on the MQB platform shared with many other cars produced by Volkswagen.

Since the vehicle was built as a successor to the Caravelle, it had to be comfortable and good-looking but still bear a van-like appearance. At the front, the narrow, high-mounted headlights resembled those fitted on the Golf, while the fat bumper sported a massive grille with a rhomboidal pattern. From its profile, the MPV featured wide windows that covered the upper third-part of the vehicle. Apart from the big front doors, the Multivan also received one or two sliding doors, depending on the options. Last but not least, the rear tailgate could've been electrically opened.

Inside, the Multivan could accommodate up to seven passengers on three rows of individual seats. The last row, which was previously fitted with a bench, consisted of individual places that could've been moved or removed, depending on the necessities. The middle row featured two captain seats that could rotate 180 degrees. At the front, a pair of high-mounted seats were already usual for the Multivan. These allowed their occupants to enjoy the great view offered by the wide windscreen and tall side windows. In addition, the dashboard was mounted low enough not to obstruct their sight.

Underneath the car's skin, Volkswagen installed a choice of hybrid and turbodiesel engines. In addition, a plug-in hybrid fitted with a 13kW battery pack was available. 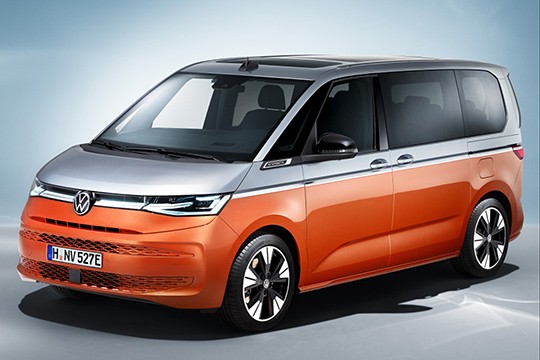