Considered by many a Golf GTI with a trunk, the Jetta GLI was the most potent version of the best-selling Volkswagen in more than three decades.

The German carmaker refreshed the entire lineup in 2021, three years after the car's introduction on the market. Even though the overall appearance remained the same, there were a few visual differences compared to its predecessor.

At the front, the carmaker installed a new bumper that sported LED fog lights for the GLI version. The hexagonal pattern on the grille was black and adorned by a horizontal red slat with two chromed lines. On the lower side, VW placed a black apron with additional cooling areas. In addition, a set of black door mirrors was specifically exclusively for the GLI version, while a set of 18" black, light-alloy wheels completed the car's aggressive look.

Inside, Volkswagen upgraded the infotainment system to the MIB3 level, and the carmaker spoiled the driver with a 10" digital instrument cluster. In addition, the GLI featured exclusive red stitching on the seats' upholstery on the seats, providing a sporty appearance.

The GLI was based on the MQB platform but with multi-link independent rear suspension like its less-powered siblings. Volkswagen also installed an electronically-controlled limited-slip differential, which worked together with the adaptive damping system. Its turbocharged 2.0-liter unit, with direct fuel injection, provided 228 hp. Volkswagen paired it with a standard six-speed manual transmission, while a seven-speed automatic (dual-clutch) was on the options list. 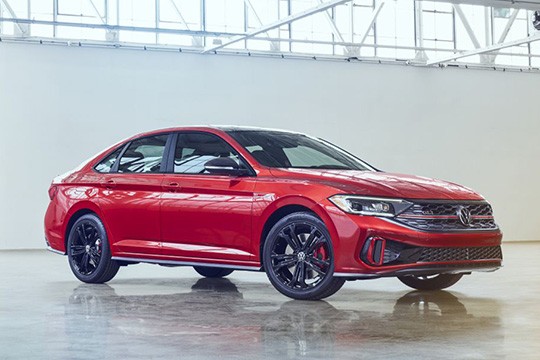