A cutdown version of the Volkswagen Passat, the Jetta was the best selling model in America.

For 2014, Volkswagen corrected some of the deficiencies the previous model had.

Available as a sedan or a 4-door wagon body style, the exterior design remained pretty much unchanged for 2014, however, the 2.5-liter unit was dropped.

A 1.8-liter 4-cylinder turbocharged engine replaced the 2.5-liter 5-cylinder engine, provided the same 170 hp as the older unit, however, offering more torque for better throttle response. Fuel economy was also improved with the new unit, mated with a 5-speed manual transmission or a 6-speed automatic gearbox.

One of the major updates was represented by the new sophisticated rear independent suspension that offered uncompromised control.

A hybrid version was also offered, developing the same power as the new 1.8-liter unit, however, the fuel consumption was impressive.

The performance choice in the Jetta line was represented by the top-of-the-range trim level, the GLI. It featured a 2.0-liter turbocharged 4-cylinder powerplant that developed 210 hp.

The design was also different, with sport trims inside and out and mechanicals were also improved with a stiffer suspension for better handling. The GLI featured red brake callipers.

While the Ford Focus and the Mazda 3 were strong competitors for the Jetta, neither of them could match the interior space the VW’s model offered. 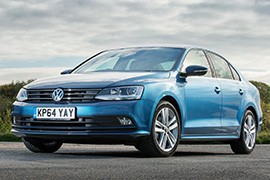