Volkswagen introduced the sixth generation of the Jetta/Bora/Vento in 2010 and tried to convince the customers that it was a sporty compact sedan with four doors.

Like its predecessors, the Jetta/Bora/Vento was named according to customers' preferences, depending on the market. It shared its platform with the VW Golf VI and sported independent suspension in all corners. But it wasn't a true sport-sedan, like the Passat CC. It was just something more than a Golf with a trunk in the back.

On the outside, the Passat-like headlights with sharp lines and narrow, angular design showed more character than its Golf sibling. Its greenhouse was longer and sported a raked-forward rear windscreen. Just like its predecessors, the ascending beltline started on the headlights and went up all the way to the taillights.

Since it was built on a longer version of the Golf's platform, inside it offered more room for the rear passengers. The carmaker installed vents on the back of the center console, so there was air-conditioning for the rear seat occupants as well. Volkswagen considered that installing a split-folding rear bench seatback would be a good idea for those who needed one. At the front, the Jetta came well equipped with an infotainment unit installed in the center stack.

Under the hood, Volkswagen installed a wide choice of engines ranged from a turbocharged 1.2-liter TSI all the way up to a 200 hp 2.0-liter TSI. In 2014, Volkswagen prepared a facelifted version that led to the dismissal of the 2.5-liter naturally aspirated engine. 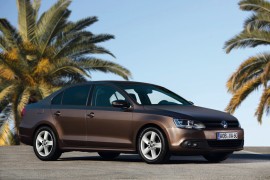