Volkswagen made a surprising move when it introduced the ID.4 on the market. The carmaker said that it was just part of its beginning in the electric trend. Then, the ID.5 came to prove that.

While the ID.4 emphasized family and traditional-looking vehicles, the ID.5 was a step further. VW made it for those looking for a sporty yet ecological vehicle. While both cars shared the same platform, the ID.5 was a clear evolution in more areas, not just from the design point of view.

At the front, the car kept the same LED headlights as its sibling. Even though it sported a grille-like part above the bumper, it was actually a closed panel, crossed from side to side by an LED daytime running light. Like the ID.4, it features a lower grille to help cool the batteries and the electrical system. Up to the B-pillar, the car looked similar to its more conventional-looking sibling. After that, the sloped roofline created a coupe-like styling up to the wide liftgate. A small wing with an LED third braking light added an air of sportiness. To complete the car's sport-oriented profile, Volkswagen installed a set of 21" light-alloy wheels.

Inside, despite the sloped roof, the car was roomy enough for four adult passengers. In front of the driver, a minimalist-looking dashboard featured a center stack with a 12" infotainment screen. In addition, a head-up display was on the options list. As for the trunk, since the car was slightly longer than ID.4, it had the same 549 liters (19.4 cu-ft) of space. 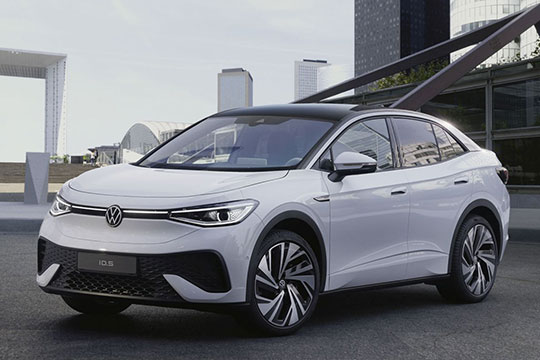