Volkswagen decided to return the classic, beloved Bulli in a new vehicle, but with a design inspired by its famous former predecessor, and called it the ID.

Based on the same platform as the rest of the ID. Family, the ID. Buzz tried to make a stance in the mid-size MPV and LCV segment with its electric powertrain that provided it enough power and energy to be used as a delivery van or a family-oriented leisure vehicle.

At the front, the carmaker placed a sloped front fascia instead of a flat, vertical one as on the Bulli. Yet, the big, chromed VW badge and the wide V-shaped front panel resembled the older model. For the apron, the carmaker chose an unusual rhomboidal pattern. On its sides, the car unveiled the same basic principle as its predecessor, with regular, front-hinged front doors and sliding ones for the rear passengers. The back was also unusual, with very slim taillights connected via an LED strip that ran across the tailgate.

The interior was a completely new story, with a display above the center stack and a TFT screen in front of the driver. But Volkswagen took a smart decision and let a passage between the front seats, with a retracted center console that divided only the space between the front passengers. The car featured a 60/40 split-folding bench wide enough for three occupants with plenty of legroom and headroom in the back.

Unlike its siblings, the ID.3 and the ID.4, the ID. Buzz was available with only one drivetrain option at the launch. Volkswagen chose a 204 hp electric motor fed by a 77 kWh battery pack for propelling the vehicle. It could also store energy and deliver it either to other cars or to a home. 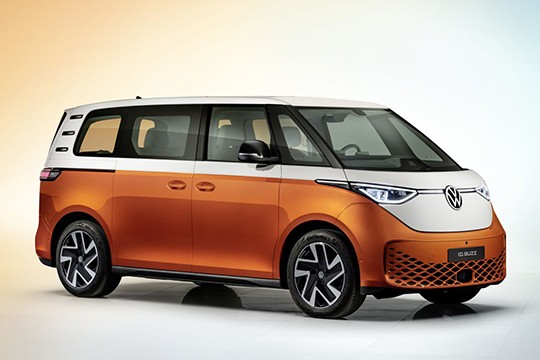 2 This Volkswagen Type 2 Sunroof Deluxe 21-Window Samba Is the Real-Deal, Full of Surprises