Volkswagen introduced the Golf's fifth generation on the market in 2003, and, in the following year, the carmaker brought the most-wanted version: the GTI.

The first generation of the Golf used the GTI version for its sportiest version. Later on, the carmaker introduced special versions such as the R32, which offered more power. But the GTI badge remained the most respectable among Golf's fans, and the 2004 model was no exception.

Volkswagen knew that teenagers from the '70s when it launched the first GTI were already parents by 2004 and needed more room and comfort for their families. Thus, it was no wonder that it offered the GTI with a five-door shape and brought more comfort for its occupants without cutting the performance or thrills. Regardless of the body version, all Golf's V GTIs sported a different aerodynamic package than the rest of the range. At the front, it featured a lower apron with a deeply sculptured grille in the middle and two side-pods for the fog-lights. The lower part of the grille was decorated with a red stripe and a chromed GTI badge. It featured a dual chromed exhaust on the side and a roof spoiler at the top of the tailgate in the rear.

Inside, Volkswagen installed high-bolstered bucket-seats with GTI lettering embroidered in the headrests. Exclusively for this version, the Golf sported a GTI badge on the steering wheel's lower spoke. In the back, the five-door GTI featured Isofix anchoring points for child seats on the split-folding bench.

Under the hood, the carmaker installed a 2.0-liter turbocharged gasoline engine with a direct fuel injection system. It paired it either to a six-speed manual or to a six-speed automatic (dual-clutch) DSG transmission. 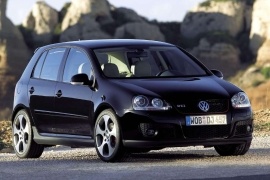