While the Golf R was designed for those who enjoyed driving and didn't need a large trunk in the back, the Golf R Variant came as an important addition for those who needed a station wagon.

A family with kids needs a car with a big trunk where the bicycles, scooters, and other toddler-related items need to be stored. On the other hand, nobody said station wagons can't have powerful engines. And Volkswagen decided to give an important boost to its already known Golf Variant in the form of the R version.

The 2021 Golf R Variant shared most of its bodywork with the Golf R up to the B-pillar, but it featured different C-pillars and rear doors. An additional glass area covered the space between the C- and the D-pillar. The carmaker sacrificed some part of the trunk space for this Golf generation and raked-forward the tailgate for a sportier look. Volkswagen even installed a roof spoiler on the upper side of the rear windscreen. Under the bumper, the carmaker installed four oval exhausts, similar to those from the Golf R hatchback.

Lile its Golf R sibling, the R Variant featured a sporty interior with high-bolstered front seats. Its full-digital instrument cluster and the paddle-shifters behind the wheel were just a confirmation that it wasn't just a regular grocery-getter. But, since it was a station wagon, it offered a split-folding rear bench which provided between 611 liters (21.6 cu-ft) and 1,642 liters (58 cu-ft) of trunk space.

For the drivetrain, Volkswagen installed a turbocharged inline-four gasoline engine. It was paired to either a 6-speed manual or a 7-speed DSG (dual-clutch) automatic transmission. Power went to all corners via a newly developed all-wheel-drive system with torque vectoring. 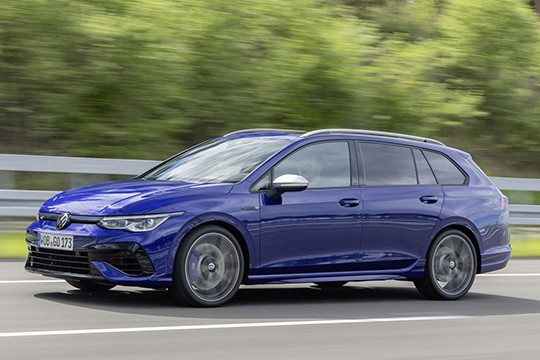