It was the last naturally aspirated Golf GTI, but it wasn't as special for its era as its predecessors were in their times.

When Volkswagen introduced the third generation of the Golf, its fans were stunned, but not in appreciations. The car featured a completely different styling, and the top version was just slightly quicker than the older Golf II GTI. It wasn't that much of a hot-hatch as it was before. Moreover, there were family sedans with lower power and better performances.

The rounded shapes of the 1992 Golf GTI were the first reason why its fans didn't like the car. It was bigger, and the oval-shaped headlights were completely different than the four rounded ones installed on its predecessors. At the front, the bumper featured three intake grilles at the bottom, turn signals, and stationary lamps. In the back, the bumper and apron's simple design were accepted, along with the twin exhausts.

Inside, the car was clearly addressed to a wider range of customers. There were more comfort features such as the air-conditioning, power windows, and more sound-deadening materials, making the car heavier. The bolstered seats were praised, and the customers didn't really care if there was a checker-flag design or spots on a canvas.

Under the hood, Volkswagen installed a choice of two engines for the GTI with two power outputs: 115 hp and 150 hp. The more powerful version was just 0.3 seconds quicker than the former Golf II GTI. Opel Kadett GSI, the main competitor for the Golf GTI, offered a 2.0-liter engine with 150 hp and rocketed from 0 to 100 kph (0-62 mph) in 7.7 seconds. That was a second and a half faster than the Golf GTI. 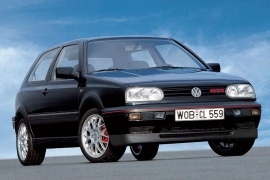