While it was already common for Volkswagen to offer a station wagon in its compact-segment, it was unusual to offer two vehicles based on the same platform with the same shape.

In 1997, Volkswagen introduced the Golf Variant. It was the first station wagon based on the successful Golf. Also, since the second Golf generation, Volkswagen offered it as a three-box sedan version named Vento. In 1999, the German carmaker had an unusual idea and changed the name from Vento to Bora and delivered it in a station-wagon shape. Its direct competitor was the Golf Variant.

Apart from the front fascia, there were very few differences between the two cars built by the same carmaker. To prevent direct competition, on some markets, Volkswagen offered only one of them. The Bora kept the same front fascia as its sedan sibling, with squared headlights. In the back, the car featured corner-mounted taillights and left a wide opening between the D-pillars for the tailgate.

Inside, there were some small differences between the Bora Variant and the Golf Variant. While the former was designed for families and tried to look more upmarket, the latter was still based on the same vehicle for the young generation.

Under the hood, Volkswagen installed a wide choice of engines ranging between a 115 hp 1.9-liter turbo-diesel engine and the VR6 top performer that sent 204 hp in all corners for the VR6 Syncro version. 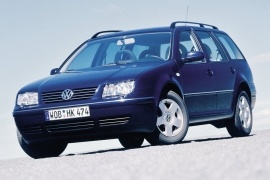