Volkswagen unveiled the second generation of the Chinese-specific Bora in 2007 at the Beijing Auto Show to increase its sales on that market.

The German carmaker considered the Chinese market a significant one since the '80s. It started a joint-venture with First Automobile Works to assemble cars in the People's Republic of China in 1988. Over time, the company developed and produced country-specific vehicles to fit the market's needs and exceeded 780.000 sales in 2007. The second Bora generation was based on the same platform as the Golf IV and was adapted to the Chinese market.

At the front, the 2008 Bora showed a front fascia that resembled the EOS, with its headlights' specific design. It was longer than the European or the U.S. cousins, thanks to its longer wheelbase. In the rear, the taillights looked closer to the Passat range than the Bora/Jetta siblings.

Inside, the car offered more legroom for the rear passengers and a dashboard design that looked closer to the Golf MKV than to the Golf MK IV. Another good point scored by Volkswagen was the trunk size, which was important for the Chinese market. It reached up to 450 liters (15.9 cu-ft), and its loading area could have been increased by folding down the rear bench seatback.

Under the hood, Volkswagen installed Euro4 gasoline engines paired as standard to a 5-speed manual. The carmakers offered an option for a 6-speed automatic transmission for the range-topper 2.0-liter version. 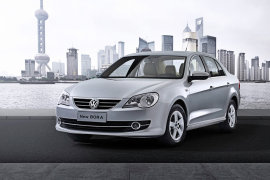 2 Volkswagen Eurovan Winnebago Camper Is in Dire Need of TLC, Will Take You Places

5 The Volkswagen Lamando 5XL Can Seat Up to 10 People, Is Not Photoshopped