Volkswagen introduced the fourth generation of its compact sedan lineup in 1998 with different names for different markets, as Jetta, Bora or Vento, based on the same platform as the Golf MK4.

The German carmaker didn't want to cause any confusion between models, so it drastically changed the car's exterior, and, in the end, it didn't even resemble the Golf. Its design department managed to create a completely new visual identity.

Even though it was introduced at the peak of the bio-design era, the Bora featured squared headlights and a conventional grille incorporated into the hood's panel. Its greenhouse was as tall as the one on the Golf but with a sloped rear window instead of the vertical one, while the trunk line sat higher than the hood's, creating a sportier appearance.

Inside, there was room for five adult passengers with a pair of regular seats at the front and very little side bolstering. In the back, the Jetta/Bora/Vento featured a flat bench suitable for three adults with adequate legroom and headroom but not very roomy. Its dashboard didn't show any special design. It was bland but functional, with the stereo mounted on top of the climate control unit and a rounded instrument cluster that featured four analog dials and two LCDs inside the speedometer and tachometer.

The Jetta was available with a huge range of engines, but Volkswagen didn't offer them on all the markets. Some were specific, such as the diesel and turbo-diesel versions, which were not very popular in the U.S. but on high-demand in Europe thanks to their fuel-efficiency. Volkswagen offered a few versions with an all-wheel-drive system. 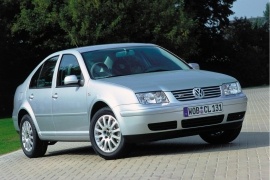 4 If You've Ever Wanted To Own a Volkswagen Type 2 Bus, the Love Bus Is Your Best Chance