4 Volkswagen Considers Restyled ID.3 To Be a Second-Generation EV, Could Debut Autumn 2023

Built on the same platform as its Golf sibling from the same era, the Beetle appealed to the collective memory and followed the retro-design trend.

While the Golf and the rest of the compact-sized vehicles built by the Volkswagen Group were mainly built for practicality, the Beetle was created to attract the old times. Some people grew up with their parents' old Beetle and tried to get the same feelings now on board this rounded vehicle. Unlike the original Beetle, this one came with both the engine and the transmission at the front.

The car's front fascia featured rounded headlights that clearly mimicked the old Beetle's ones. Moreover, it didn't even feature an upper grille, just a low-mounted one into the apron. From its sides, the entire car looked like it was designed using just three half-circles: one for the greenhouse and the other two for the front and rear wheel arches. Its tall side windows and long doors allowed passengers to easily get in and out of the cabin. Its sloped back, with a wide windscreen, also resembled its ancestor.

Inside, Volkswagen created an airy cabin with two bucket seats at the front and a bench in the back. The Beetle's dashboard was one of the most attractive parts of the vehicle. Its minimalist design was complemented by a round instrument cluster that resembled the original Beetle. In addition, the automaker placed a small vase and support next to the dials, so the owner could put a small flower in there.

Volkswagen installed a wide choice of engines, depending on the market. While the Europeans got the famous TDI engines, the U.S. customers were treated mostly with gas-powered inline-fours. 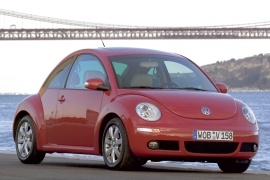