Volkswagen developed the Ameo specifically for the Indian market and built it there to avoid costly import taxes.

After its successful experience with the European Polo Sedan, Volkswagen considered it to repeat the same success with a three-box version of the Polo MKV on the Indian market. After adding a trunk to the small-segment hatchback, the result was a competitive product that had to fight against Honda Amaze, Maruti Suzuki Dzire, and Ford Aspire.

The front fascia was carried over from the Polo hatchback but had a few differences. Depending on the trim level, the carmaker added a chromed trim on the bumper, underlining the fog lights and crossing from side to side above the lower front grille. At the back, a small window added in the C-Pillar increased the rear three-quarter visibility adding more safety to the vehicle, while a tall trunk ended the car with a straight line.

Inside, the carmaker offered a few trim options. Volkswagen carried over the dashboard from the rest of its Indian range, with an LCD fitted between the tachometer and speedometer. Depending on the options, an infotainment unit adorned the center stack flanked by the volume and tuning knob on the lower side and a few buttons on the upper side. The car's drawback was the rear passengers' legroom, where its small wheelbase and interior layout didn't allow too much room in the back. The trunk was also smaller than its competitors.

Under the hood, Volkswagen relied on three engine choices: two with gasoline and one turbo-diesel. Depending on the trim level, it was available with a manual or a seven-speed automatic (dual-clutch) gearbox. 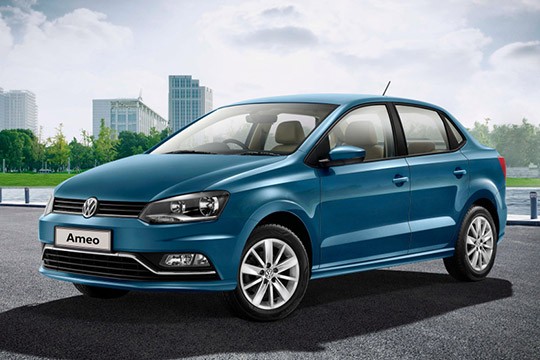