3 Marvel’s 'Ant-Man and The Wasp: Quantumania' Gets Electrified by Volkswagen

When Volkswagen introduced the Amarok in 2010, it didn't know too much about this segment, but most of the model's problems were solved in 2016 when the carmaker introduced a facelift for this pickup.

Thus, the idea of a lifestyle pickup started to emerge on the market. Apart from a few Japanese brands, Volkswagen Commercial Vehicle developed the Amarok, which was exactly that: a pickup that was better at transporting light loads and five people than heavy loads and just two.

Volkswagen refreshed the Amarok in 2016 and made it look more like an SUV than a utility vehicle. Thus, the front fascia received a new pair of headlights with integrated LED daytime running lights. The grille was also revised and now resembled the ones fitted on the likes of Tiguan and Touareg. Its profile still kept the same flared, angular wheel arches. As an option, the automaker offered side steps and a roll-bar in the bed area.

Inside, there was more of an SUV feel than a utility vehicle. The dashboard was covered with softer materials and sported a new infotainment system atop the center stack. Moreover, the instrument cluster featured large dials and a TFT display between the tachometer and speedometer that showed various data from the onboard computer. Depending on the options, the Amarok could have been fitted with fabric or leather upholstery.

But the most significant change was under the hood, where Volkswagen installed a 3.0-liter turbo-diesel V6 engine, which was available with a few power options. Another unusual decision was for the transmission. While the manual versions were fitted with a high and low transfer case, the eight-speed automatic was an all-wheel drive affair with no reduction gear. 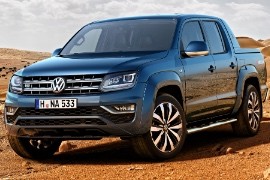