The Vauxhall Zafira Tourer was one of the best MPV with 7 seats from the market. Unlike other vehicles from its segment, it was based on a car platform instead of a utility vehicle. And that added more comfort and better driving experience.

The tall, long Vauxhall Tourer evolved a lot since its first-generation back in 1999, which was based on the compact-class vehicle Astra. The 2011 model was based on the mid-size sedan Insignia (known as Holden Commodore or Buick Regal) but with a longer wheelbase. That made more room for the mid and rear passengers. The driver had a good driving position with a great view of the road. The instrument cluster was with regular, round dials, and a small display for the on-board computer.

For more information, the driver could have access to the infotainment unit placed on top of the dashboard that was Apple CarPlay and Android Auto compatible. The 6-speed manual came as standard while the 6-speed automatic was offered as an option.

The middle row featured a Flex 7 system that allowed to adjust each seat individually back and forth and recline. The last row of seats was good for two children.

The engine choice was big, starting with a 1.4-liter turbocharged and went up to a 2.0-liter turbo-diesel unit. Due to a good aerodynamic coefficient, the Zafira Tourer was fuel-efficient for its class. 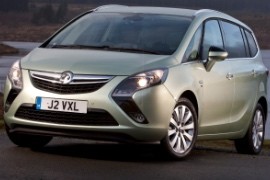